To numerically simulate vortex shedding, CFD is used to calculate the unsteady flow that arises from a fluid moving past an obstruction. Downwind of the obstruction are regions of lower pressure which causes the fluid which initially was deflected around the obstruction to get sucked into these regions, begin to circulate, and form vortices.

For a Newtonian fluid, it is sufficient to use the Navier-Stokes equations as the governing equations, and choose either the finite element method, FEM, or finite differencing, FD, to do the simulation. Vortex shedding is more likely in incompressible fluids than compressible fluids, so the former is used when capturing this phenomenon. Although both types of fluids are represented by the Navier-Stokes equations, their methods of solution differ significantly. For instance, when using FD for incompressible fluids, it is common to have an explicit expression for the velocity as you integrate the equations in time. In compressible fluids, the governing equations are often written in terms of the conservative form of Euler's equation, with velocity and pressure extracted from the conserved quantities(e.g. mass, momentum, energy). Also, compressible flows usually involve the calculation of additional quantities such as density and temperature.

The images below were created for the case of 2-D flow past a square obstruction with a Reynolds number of 1000 and freestream boundary conditions on the top, bottom, and right boundaries. The quantities of the Navier-Stokes equations were non-dimensionalized and the QUICKEST finite differencing algorithm by B.P. Leonard was used. The grid was uniform with either a 204 x 90 node mesh or a 102 x 45 node mesh. 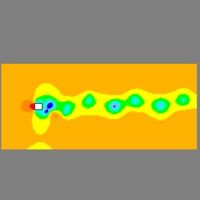 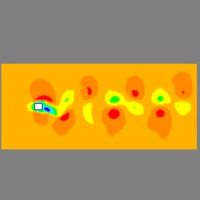 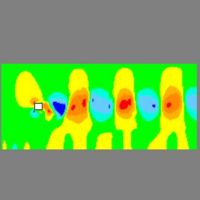 streaklines for square obstruction at 96s and 2400 timesteps for 0 angle of attack flow.

pathlines for triangle obstruction at 96s and 2400 timesteps for 0 angle of attack flow.

streaklines for square obstruction at 96s and 2400 timesteps for 15 angle of attack flow.

The incompressibility of the fluid is enforced through the continuity equation using pressure as a corrective quantity whose gradient in either the x or y direction is added to the velocity in the respective direction. Calculating the pressure correction involves solving the discrete Poisson equation for pressure.

Use of a staggered grid, where pressure and velocities in the x and y directions are calculated at alternating grid points, is commonly used with upwinding to avoid oscillatory behavior.