The Navier-Stokes equations are the basic governing equations for a viscous, heat conducting fluid. It is a vector equation obtained by applying Newton's Law of Motion to a fluid element and is also called the momentum equation. It is supplemented by the mass conservation equation, also called continuity equation and the energy equation. Usually, the term Navier-Stokes equations is used to refer to all of these equations.

The instantaneous continuity equation (1), momentum equation (2) and energy equation (3) for a compressible fluid can be written as:

For a Newtonian fluid, assuming Stokes Law for mono-atomic gases, the viscous stress is given by:

Where the trace-less viscous strain-rate is defined by:

, is given by Fourier's law:

Where the laminar Prandtl number

To close these equations it is also necessary to specify an equation of state. Assuming a calorically perfect gas the following relations are valid:

Note that the corresponding expression (15) for Favre averaged turbulent flows contains an extra term related to the turbulent energy.

Equations (1)-(9), supplemented with gas data for

, form a closed set of partial differential equations, and need only be complemented with boundary conditions. 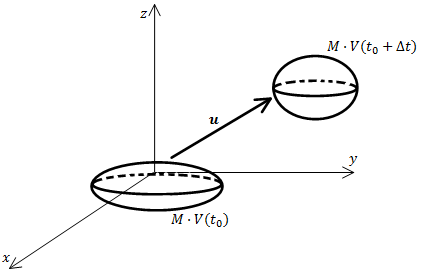 A material volume contains the same portions of a fluid at all times. It may be defined by a closed bounding surface

eneveloping a portion of a fluid at certain time. Fluid elements cannot enter or leave this control volume. The movement of every point on the surface

is defined by the local velocity

. So one can define:

Applying the Reynolds transport theorem and divergence theorem one obtains:

Since this relation is valid for an arbitrary volume

, the integrand must be zero. Note that now it can easily be assumed that the volume is a fixed control volume (where fluid particles can freely enter and leave the volume) by taking account of mass fluxes through the surface

at all points of the fluid. For an incompressible fluid the change rate of density is zero. One can simplify (1) to:

All is started from Newton's law:

and which is applied to the fluid parsel 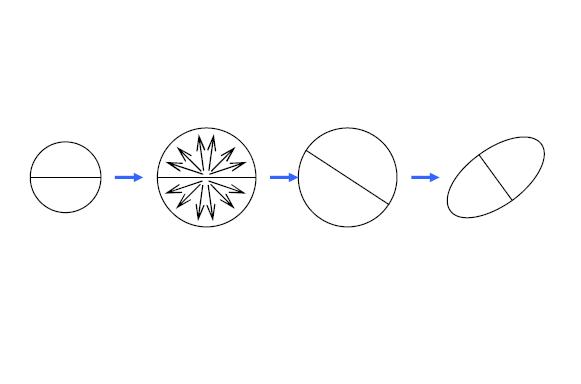 Expansion, rotation and deformation of a fluid parsel

There are two types of forces: body(mass) forces and surface forces. Body forces act on the entire control volume. The most common body force is that due to gravity. Electromagnetic phenomena may also create body forces, but this is a rather specialized situation.

Surface forces act on only surface of a control volume at a time and arise due to pressure or viscous stresses.

We find a general expression for the surface force per unit volume of a deformable body. Consider a rectangular parallelepiped with sides

and hence with volume 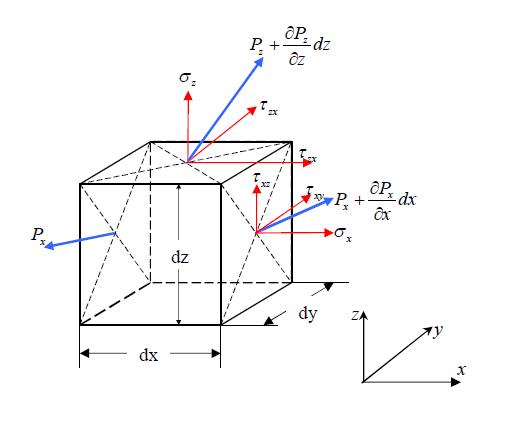 At the moment we assume this parallelepiped isolated from the rest of the fluid flow , and consider the forces acting on the faces of the parallelepiped.

To both faces of the parallelepiped perpendicular to the axis

and having the area

The force due to the stress is the product of the stress and the area over which it acts. 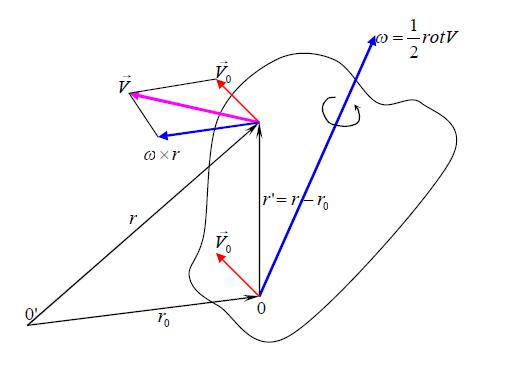 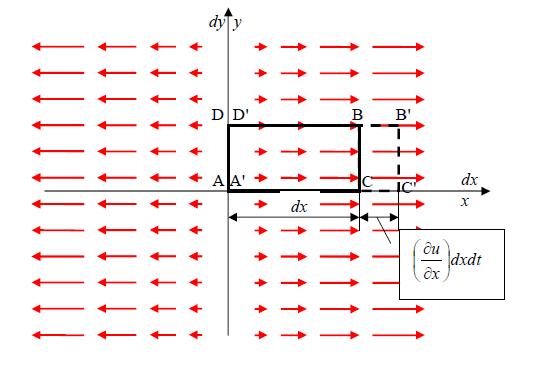 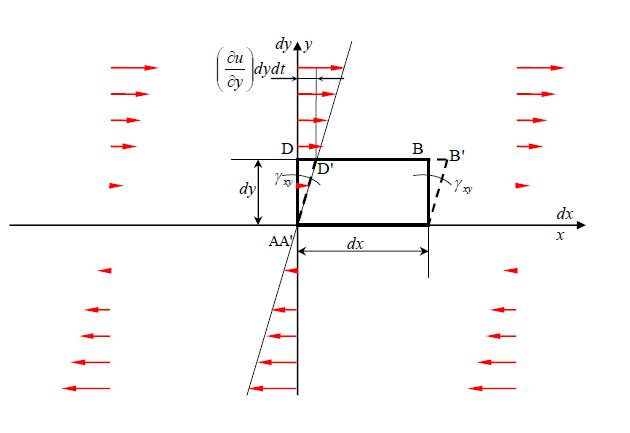 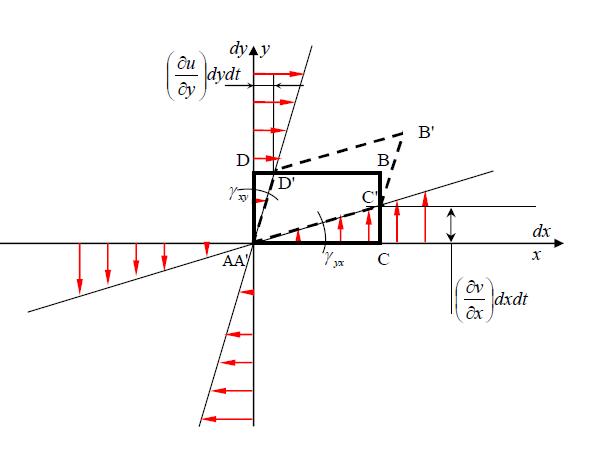 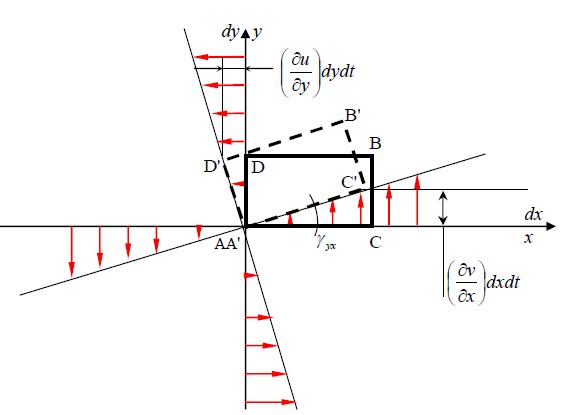 Newton came up with the idea of requiring the stress

to be linearly proportional to the time rate at which at which strain occurs. Specifically he studied the following problem. There are two flat plates separated by a distance

. The top plate is moved at a velocity

, while the bottom plate is held fixed. 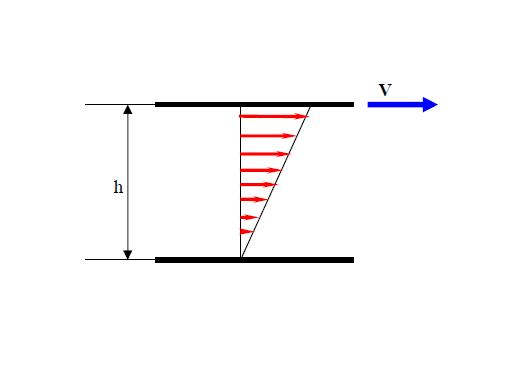 Newton postulated (since then experimentally verified) that the shear force or shear stress needed to deform the fluid was linearly proportional to the velocity gradient:

The proportionality factor turned out to be a constant at moderate temperatures, and was called the coefficient of viscosity,

. Furthermore, for this particular case, the velocity profile is linear, giving

Fluids that have a linear relationship between stress and strain rate are called Newtonian fluids. This is a property of the fluid, not the flow. Water and air are examples of Newtonian fluids, while blood is a non-Newtonian fluid.

Stokes extended Newton's idea from simple 1-D flows (where only one component of velocity is present) to multidimensional flows. He developed the following relations, collectively known as Stokes relations

is called molecular viscosity, and is a function of temperature.

is the strain rate tensor

If the temperature differences are small within the fluid, then

can be taken outside the derivative, which then reduces to

, and using vector notation, the incompressible Navier-Stokes equation reduces to

If the viscous effects are negligible, we obtain the Euler equation

Derivation of the energy equation

By applying the first law of thermodynamics to a material volume

the total energy per unit mass

is the rate of heat addition

per unit of mass, and that there is a heat flux per unit of area through

the thermal conductivity, and

the tempereture, which is another state variable. Using the divergence theorem we find

By application of the transport theorem and substitution we obtain

Since this holds for every

However, recently, Prof. Penny Smith submitted a paper, Immortal Smooth Solution of the Three Space Dimensional Navier-Stokes System, which may provide a proof of the existence and uniqueness.(It has a serious flaw, so the author withdrew the paper)

Claude Louis Marie Henri Navier’s name is associated with the famous Navier-Stokes equations that govern motion of a viscous fluid. He derived the Navier-Stokes equations in a paper in 1822. His derivation was however based on a molecular theory of attraction and repulsion between neighbouring molecules. Euler had already derived the equations for an ideal fluid in 1755 which did not include the effects of viscosity. Navier did not recognize the physical significance of viscosity and attributed the viscosity coefficient to be a function of molecular spacing.