From a consideration of the second law of thermodynamics, a reversible flow maintains a constant value of entropy.

In the theory of streamtubes, isentropic flow is the basis for compressible flow.

The well known incompressible flow does not apply if

is called the Mach-number. It is the relation between the flow-velocity u (fluid or object) and the speed of sound a in the surrounding medium.

In a caloric ideal gas the speed of sound depends on the absolute temperature T (K), the adiabatic exponent

In this case all thermodynamic properties (temperature, pressure, density and speed of sound) can be expressed with explicit formulas which are functions of the Mach-number!

In the following all thermodynamic properties are related to their properties at rest (u=0). From the energy equation for a frictionless, adiabatic flow

you will get that the enthalpy at rest ht is allways the same regardless of an isentropic or non-isentropic state change. As a matter of fact -

Temperature and speed of sound

Values which can be found at M=1 (speed of sound) are sometimes called critical values. They are marked with the superscript *.

They differ from the properties at rest only by a constant value and are therefore used as reference values as well.

In the special case for gases which contain two atoms (

in a nozzle where M equals 1 is often used as a reverence, even if M=1 is never reached. 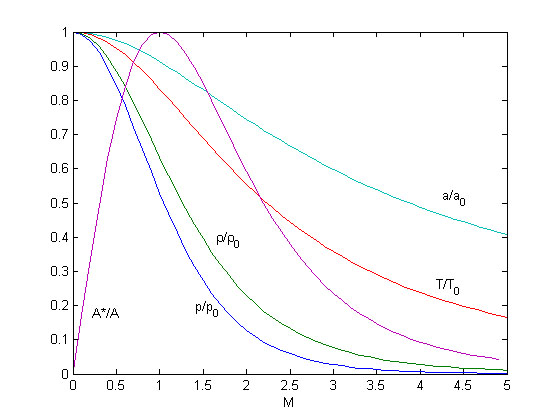 As one can see all thermodynamic properties decrease with increasing Mach-number.