This section describes the discretization schemes of convective terms in finite-volume equations. The accuracy, numerical stability, and boundedness of the solution depend on the numerical scheme used for these terms. The central issue is the specification of an appropriate relationship between the convected variable, stored at the cell center, and its value at each of the cell faces.

All the conservation equations can be written in the same generic differential form: 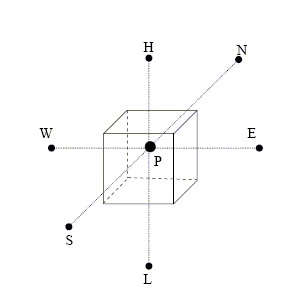 is the source term for the control volume

represent, respectively, the convective and diffusive fluxes of

The convective fluxes through the cell faces are calculated as:

is the mass flow rate across the cell face

associated with this mass flow rate is usually stored at the cell centers, and thus some form of interpolation assumption must be made in order to determine its value at each cell face. The interpolation procedure employed for this operation is the subject of the various schemes proposed in the literature, and the accuracy, stability, and boundedness of the solution depend on the procedure used.

In general, the value of

can be explicitly formulated in terms of its neighbouring nodal values by a functional relationship of the form:

will be used to construct the face value 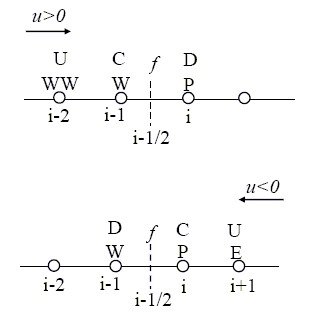 Where flow is from left to right, and

is the face in question.

In the first plot, it is not so natural to think of the central node "C" not as the present node "P". It may be thought as the first node to the upstream direction of the surface in question

It also can be considered as linear interpolation.

would appear to be the CDS, which calculates the cell-face value from:

or for more common case:

where the linear interpolation factor is definied as:

This scheme is 2nd-order accurate, but is unbounded so that non-physical oscillations appear in regions of strong convection, and also in the presence of discontinuities such as shocks. The CDS may be used directly in very low Reynolds-number flows where diffusive effects dominate over convection. 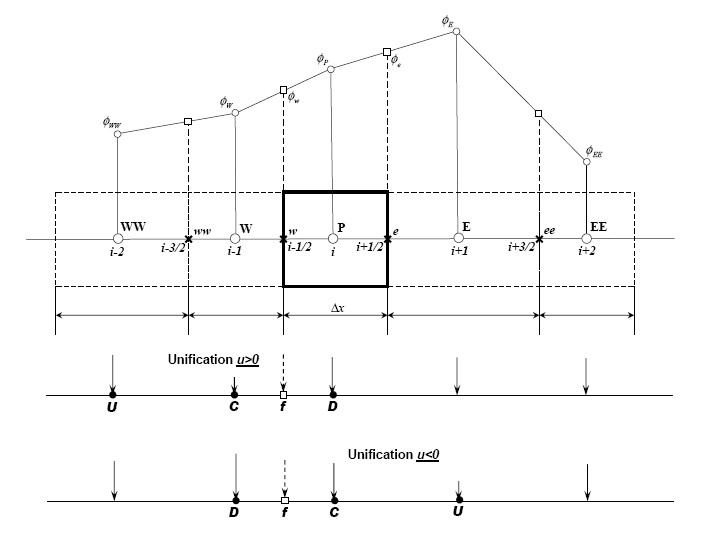 The UDS assumes that the convected variable at the cell face

is the same as the upwind cell-centre value:

The UDS is unconditionally bounded and highly stable, but as noted earlier it is only 1st-order accurate in terms of truncation error and may produce severe numerical diffusion. The scheme is therefore highly diffusive when the flow direction is skewed relative to the grid lines.

UDS may be written as

or in more general form 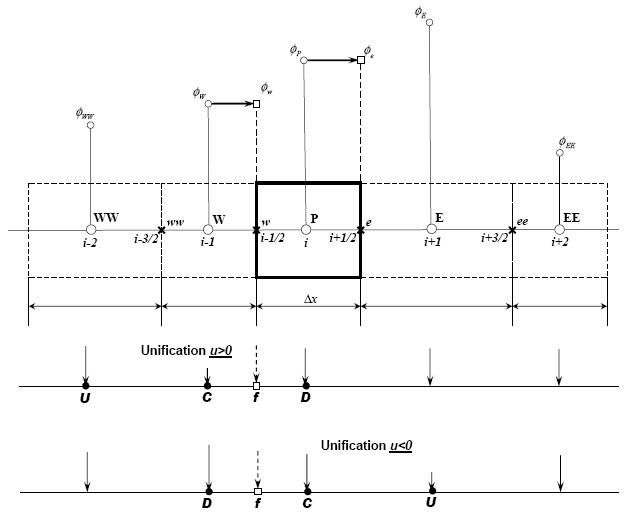 The HDS of Spalding [1972] switches the discretization of the convection terms between CDS and UDS according to the local cell Peclet number as follows:

The cell Peclet number is defined as:

are respectively, the cell-face area and physical diffusion coefficient. When

,CDS calculations tends to become unstable so that theHDS reverts to the UDS. Physical diffusion is ignored when

The HDS scheme is marginally more accurate than the UDS, because the 2nd-order CDS will be used in regions of low Peclet number.

HRS can be classified as linear or non-linear, where linear means their coefficients are not direct functions of the convected variable when applied to a linear convection equation. It is important to recognise that linear convection schemes of 2nd-order accuracy or higher may suffer from unboundedness, and are not unconditionally stable.

Non-linear schemes analyse the solution within the stencil and adapt the discretisation to avoid any unwanted behavior, such as unboundedness (see Waterson [1994]). These two types of schemes may be presented in a unified way by use of the Flux-Limiter formulation (Waterson and Deconinck [1995]), which calculates the cell-face value of the convected variable from:

is termed a limiter function and the gradient ratio

Please note that linear does not mean first order

Linear schemes are those for which

is a linear function of

Higher order schemes are usually members of the

Using this equation face variables can be expressed:

The main schemes are

Non-linear schemes are those for which

is not a linear function of

. They fall into three categories, depending on the linear schemes on which they are based.

The HRS schemes can be introduced into equation (\ref{eq4b}) by using the deferred correction procedure of Rubin and Khosla [1982]. This procedure expresses the cell-face value

and the higher-order scheme value

This treatment leads to a diagonally dominant coefficient matrix since it is formed using the UDS.

The final form of the discretized equation:

represent the six neighbouring cells, and

The coefficients contain the appropriate contributions from the transient, convective and diffusive terms in (\ref{eq1}). 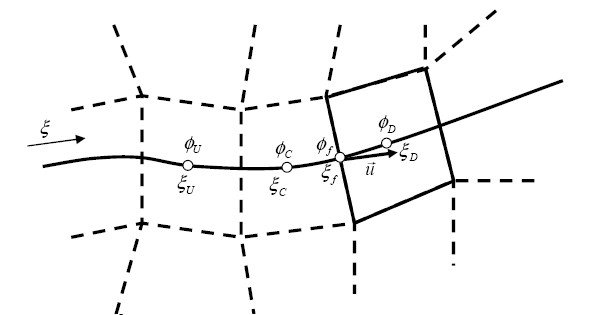 According to Leonard [1988], for any (in general nonlinear) characteristics in the normalized variable diagram (see figure below):

The horizontal and vertical coordinates of point

in the normalized variable diagram, and the slope of the characteristics at the point

for preserving the third-order accuracy for a nonuniform grid, can be obtained by simple algebra using eqs. [.....] 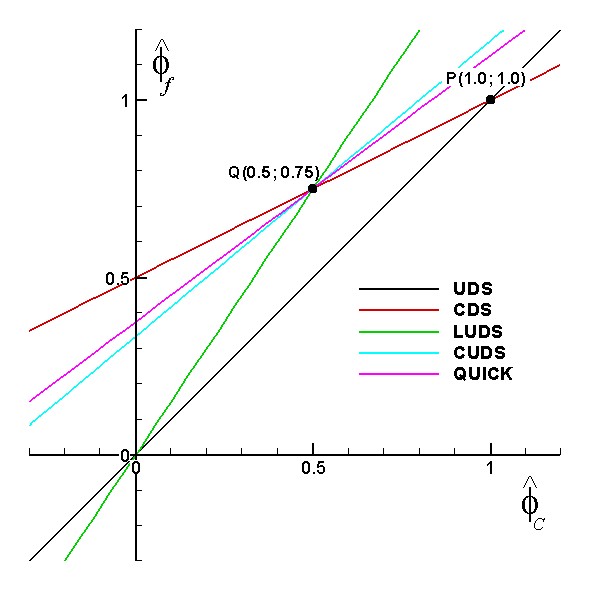 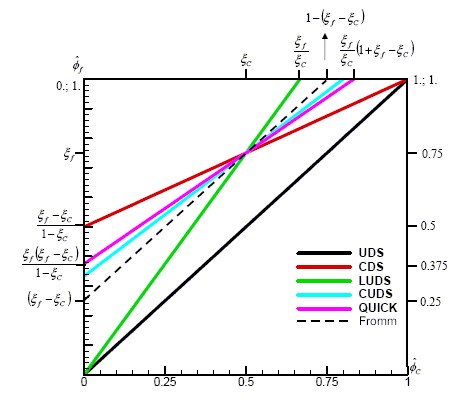 Gaskel and Lau have formulated the CBC as follows. A numerical approximation to

The CBC is clearly illustrated in figure below, where the line

and the shaded area are the region over which the CBC is valid. The importance of the CBC is to provide a sufficient and necessary condition for guaranteeing the bounded solution if at most three neighbouring nodal values are used to approximate face values. It is well known that the positivity of finite-difference coefficients is also a sufficient condition for boundedness, but this is overly stringent, for the existense of negative coefficients does not neccesarily lead to over- or undershoots. 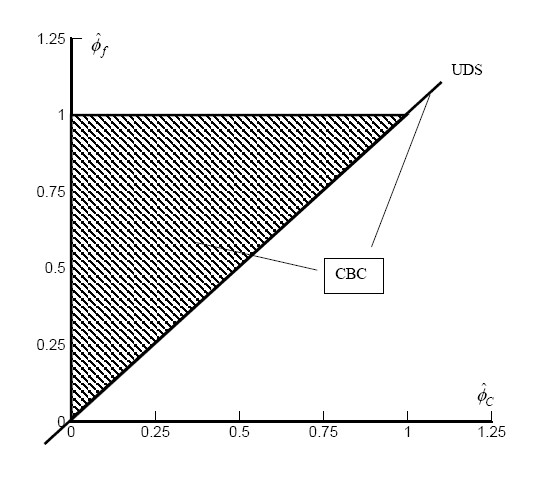 Total Variation (TV) of a function

Total Variation (TV) of a numerical solution is defined by

for a set of discrete data 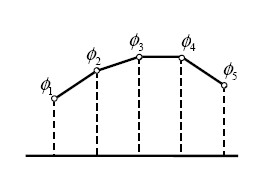 the TV is defined by

For monotonicity to be satisfied, this TV must not be increased!

Finally a numerical scheme is said to be TVD if:

is included, which depends upon function's gradients.

In order to provide monotonicity of the solution, it is necessary to implement condition [K. Fletcher] 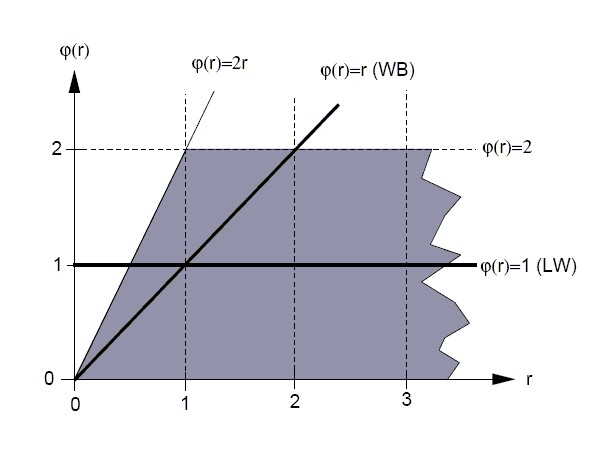