. This may be referred to as the Spalart-Allmaras variable.

The turbulent eddy viscosity is given by

d is the distance to the closest surface 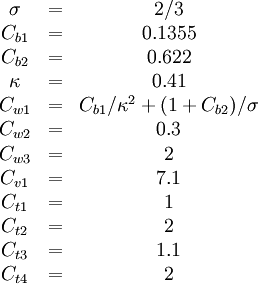 According to Spalart it is safer to use the following values for the last two constants:

[Dacles-Mariani et. al. 1995] proposed a modification of the model which also accounts for the effect of mean strain rate on turbulence production. This modification instead prescribes:

Other models related to the S-A model:

There are two approaches to adapting the model for compressible flows. In the first approach the turbulent dynamic viscosity is computed from

is the local density. The convective terms in the equation for

where the right hand side (RHS) is the same as in the original model.

Boundary conditions are set by defining values of